How Long Are Dogs Pregnant? – Pregnancy in dogs 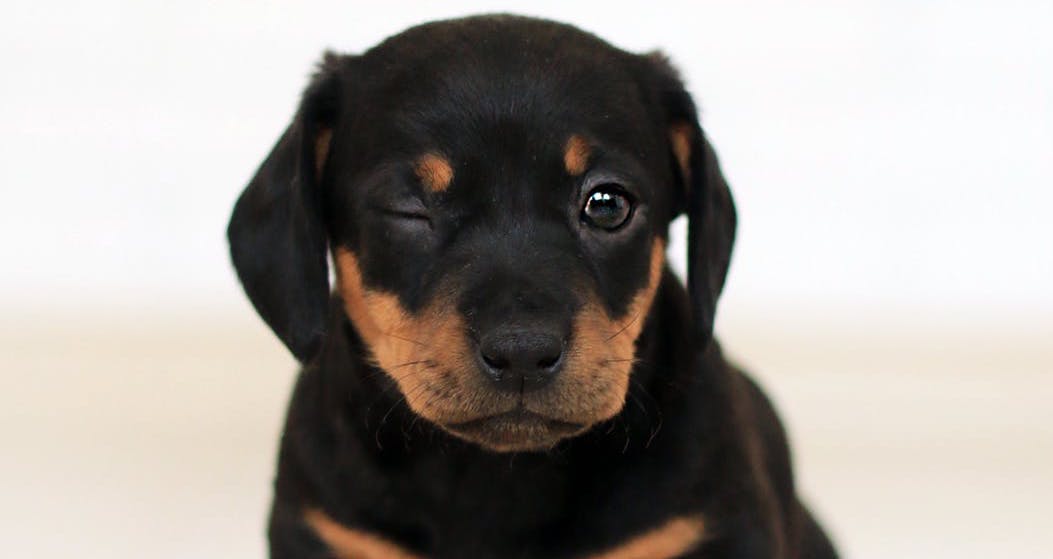 It’s about time: your dog is pregnant and offspring are on the way! In this article, we explain how to prepare for this big moment and how best to help your dog. Questions like “How can I help my dog?”, “Can she manage the birth on her own or do I have to go to the vet?”, or “What should I do if something doesn’t go quite right?” are completely normal. Basically one can say: the birth of puppies is one of the most natural things and healthy dogs usually have no problems at birth.

In our article you will learn how long bitches are in heat, how to determine pregnancy, 5 steps on how to help your bitch before and during birth, how many puppies a bitch can have and what you need for raising puppies.

How long are dogs generally in heat?

When a bitch is sexually mature differs from breed to breed and can vary. In principle, the larger a dog breed is, the longer it takes for the dog to become sexually mature. Depending on the breed of dog, this period ranges from about six to eighteen months.

How do I know if my bitch is in heat?

Just because your bitch is sexually mature does not mean that she is immediately ready for pregnancy. In the very first heat, the dog’s birth canals are not fully developed and not ready for birth. Depending on the breed, bitches come into heat about every six months.

When your bitch is in heat, her vulva has more blood flow than usual and swells up. In addition, the vulva secretes a bloody fluid. This liquid has a very special smell, especially for males, which signals that the bitch could soon be mated.

Your bitch’s behavior will also change during this time, especially that of other male dogs. About two days before the bitch reaches ovulation, she is ready to be mated. She signals this by shifting the base of her tail aside and pressing herself to the ground in a known position. In the direct ovulation phase, the vaginal discharge is clearer and more mucous. This makes it easier for the male to cover the female. It is precisely in this phase that the bitch’s porgesterone level is at its maximum.

Veterinarians can determine whether the mating of the male dog was successful and your bitch is pregnant in the following ways:

How long does the pregnancy last?

The changes in your bitch are hardly noticeable. By the end of the first month, the mammary glands are enlarging and the hair around the teats begins to fall out. From about the 30th day of pregnancy, clear or whitish mucus begins to run out of the bitch’s vulva. In the first few weeks, not so much has to be considered and the amount of food can remain the same as before. Slight weight gain is normal and shouldn’t be a cause for concern.

Step 2: the last trimester of pregnancy +:

During this period, the bitch’s appetite increases and she gains weight rapidly: she can even gain almost double the weight. (It depends on the size and breed of the bitch) Noticeable signs of pregnancy begin in the last trimester: lethargy becomes noticeable, the abdominal circumference increases, the weight increases. The bitch’s teats and vulva enlarge and thicken and by this stage movement of the fetuses in the mother’s abdomen can already be seen and felt.

Just before birth, the bitch’s vulva secretes a clear fluid. In the next 20-30 minutes the first puppy should be born. It can then take anywhere from 20 minutes to an hour for another puppy to see the light of day. If the time between puppies is more than 2 hours, a veterinarian should be notified.

After giving birth, the bitch cuts the puppy’s umbilical cord herself and eats it. This contains important minerals and vitamins that help the bitch to regain her strength. Licking the puppies encourages them to breathe and improves blood circulation.

You can tell by the behavior of the bitch whether the birth is over. Only after the last pup does she begin to clean herself and lie on her side so the puppies can reach her teats. Give the dog all the time she needs and provide cool water.