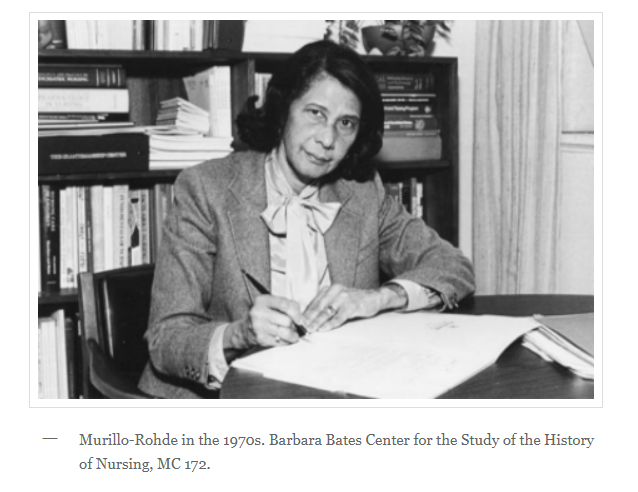 The National University of San Marcos awarded her the honorary degree Doctor Honoris Causa in recognition of her extensive contributions to nursing education and research in Latin America. She founded the Nursing School at the university, served as dean of the school for 15 years, and became president of the Panamanian Association of Nurses in 1983.

She received the Order of Merit of Panama in 1990.

Murillo-Rhode was one of seven children born to Dr. Jose Murillo and his wife, Elizabeth Rhoades. Her father was a physician and her mother was a registered nurse. At age 16, she began working as a nurse. In 1944, she moved to New York City to pursue a career in medicine. After completing medical school at Columbia University College of Physicians & Surgeons, she completed residencies in pediatrics and internal medicine at Mount Sinai Hospital in Manhattan.

In 1947, she married Dr. William Rhode, whom she met while attending medical school at Columbia. He had been a fellow student there. They lived together in Brooklyn, where he practiced general surgery. She worked part-time as a pediatrician in Brooklyn, and later became director of the Children’s Clinic at Kings County Hospital.

Murillo-Rohde graduated from Rutgers College in 1937 and received her master’s degree in 1938 from Columbia University School of Nursing. She worked as a psychiatric nurse in New Jersey and later moved to Brooklyn, where she met her husband, Dr. Carlos Rohde. Her family immigrated to the United States from Spain in the late 1800s.

In 1952, Murillo-Rohd married Carlos Rohde, whom she had met while working at Bellevue Hospital Center. He was a professor of pediatrics at Columbia University Medical Center. They lived in Manhattan and had four children together.

She went on to become a registered nurse at Kings County Hospital and taught at several universities. Murillo-Rohdes wrote numerous articles about Hispanic nurses and published books such as “The Culture Within a Culture: A Study of Puerto Rican Families Living in New York City” in 1976 and “Cultural Awareness in Nursing Practice” in 1983. She died in 1992.

Murillo-Rohde was born in Buenos Aires, Argentina, on August 23, 1920, into a wealthy family. She attended school there and later studied art history and painting at the National School of Fine Arts in Buenos Aires. In 1945 she married the Argentine painter Roberto Rohde, whom she had met while studying in Paris. They moved to New York City where he worked for several years in advertising before becoming a full-time artist. He taught her how to paint, and together they traveled around the world.

In 1949 they settled in Mexico City, where Rohde painted murals for the Mexican government. Their marriage suffered a deep rift during the political turmoil following the death of President José López Portillo in 1976; it lasted 15 years.

After his death, Murillo-Rohdé began collecting paintings by Latin American artists. Her collection grew to include works by Pablo Picasso, Henri Matisse, Joan Miró, Alberto Giacometti, Jean Dubuffet, Francis Bacon, and Andy Warhol. She donated many of her works to museums and universities, including the Museum of Modern Art in New York, the Museo de Arte Latinoamericano de Buenos Aires, the Museo Nacional Centro de Arte Reina Sofía in Madrid, and the Museo Nacionale d’Arte Contemporanea in Rome.

She became a naturalized citizen of Italy in 2000 and lived in Milan, where she continued to work as an independent curator. From 2005 to 2009, she served as president of the International Association of Art Critics.

The couple had no children.

Ildaura Murillo Rohde passed away on September 5, 2010. She had been working with the National Association of Hispanic Nurses (NAHN) since it began operations in 1987. In addition to being a member of the NAHN Board of Directors, she served as President of the organization from 1999 to 2000. As president, she led efforts to establish scholarships for Latino students pursuing careers in nursing.

Ildaura M. Murillo-Rohden Scholarship and the Dr. Ildaura M. Murilo-Rohde Award For Education Excellence by a Hispanic RN. These awards recognize members who have demonstrated excellence in nursing education, research and practice.

Murillo-Rohdé began her career working in hospitals and nursing homes in New York City, where she saw how understaffed and underpaid health care workers were treated. She came to realize that many Latino immigrants lacked access to quality healthcare because of language barriers and cultural differences. In 1974, she founded NAHN, a national organization dedicated to improving the lives of Latino nurses.

Discover Nursing offers scholarships to students enrolled in nursing programs across the United States. To apply, you must be accepted into a program and complete the application process by November 15th each year. You are eligible for one scholarship per year.

The award varies based on the number of applicants and it is awarded to a student who demonstrates financial need. In addition, you must submit a 500 word essay describing how you plan to use your degree to make a difference in society.

To qualify for this scholarship, you must be accepted to a 4-year college/university. Applicants must be residents of the US, Canada, UK, Ireland, Australia, New Zealand, South Africa, Mexico, Central America, the Caribbean Islands, or South Korea.

You must be enrolled full-time during the academic year and in good standing.

Ildaura Murillo-Rohéde dedicated her life to both providing care to members of her community and ensuring those around her were prepared to do so too. A key component of her work focused on educating nurses about cultural awareness and how to better serve patients from diverse backgrounds. On Wednesday, Google will celebrate her legacy during National Hispanic Heritage Month with a special Doodle highlighting her life and career.

Murillo-Rohède founded the National Association of Spanish Speaking Nurses in 1975 and worked as a WHO consultant to Guatemala. During her lifetime, she held several leadership positions within the organization including president and executive director. In addition, she was a professor of psychiatry and nursing at Florida International University and taught at Harvard Medical School.

In recognition of her accomplishments, Google is honoring her with a Doodle depicting her holding up a sign reading “¡Viva la medicina!” — roughly translated to mean “Long live medicine.”